The twin-cylinder Panigale has been given a thorough makeover. Renamed the Panigale V2, it takes a totally new design, it features sophisticated electronics based on a 6-axis inertial platform and, thanks to a more comfortable rider seat and the suspension set-up, offers better yet safer sports performance while making road riding more enjoyable and user-friendly than ever.

The name informs Ducati twin-cylinder enthusiasts that the bike is powered by the 955 cm³ Superquadro.

The perfect fusion of power and elegance

The new Panigale V2 Is a beefy yet compact bike of essential design with clear-cut lines that convey power without compromising classic Ducati superbike flair.

The Panigale V2 features the single-sided aluminium swingarm, the hallmark of every high-end sports Ducati. The extensive fairing highlights the more compact twin-cylinder Superquadro engine (smaller in comparison to the Desmosedici Stradale), creating a bike that is visibly leaner and less intimidating than the Panigale V4. 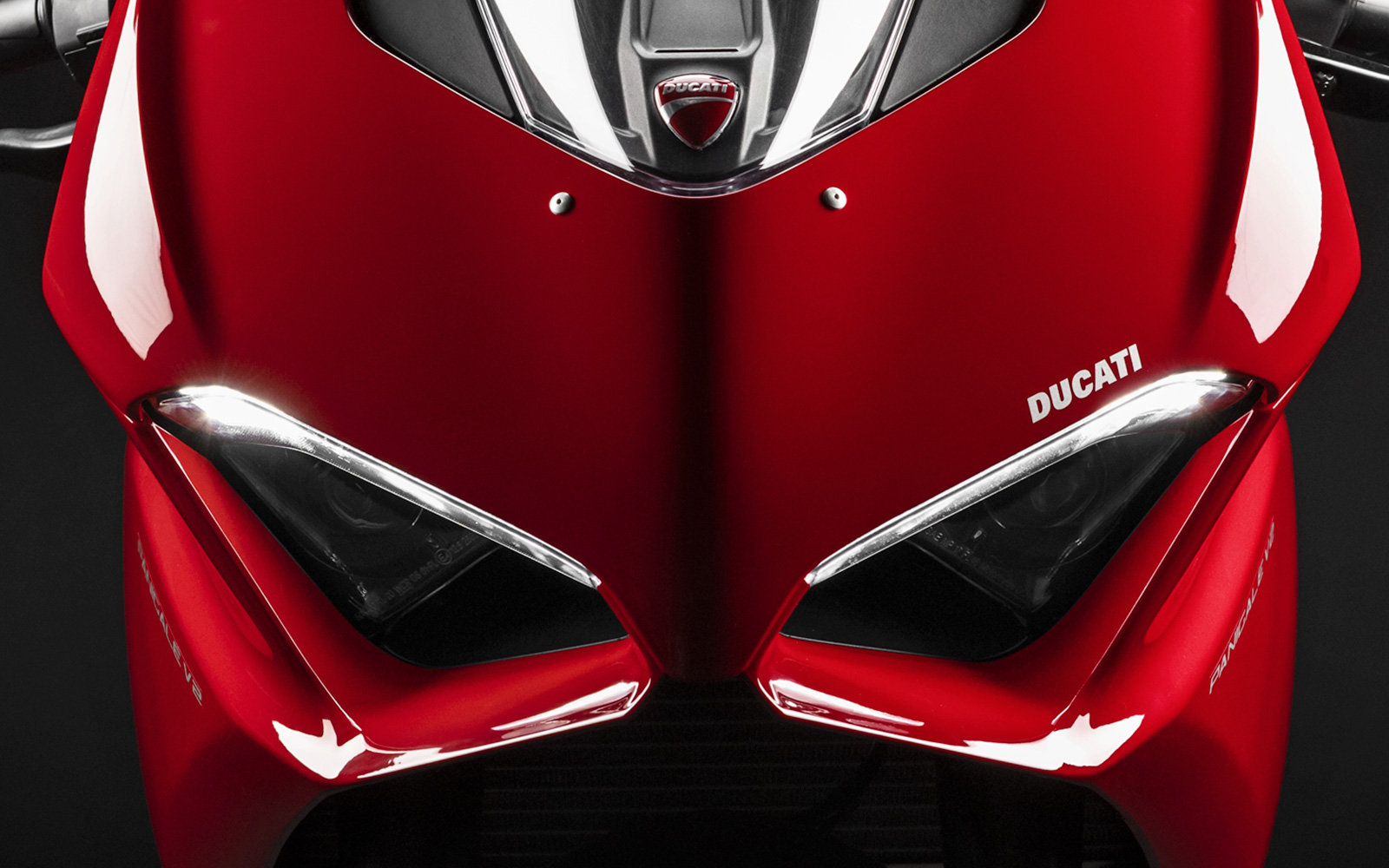 Dominating the front end are the two large air intakes, the upper parts of which incorporate the full-LED headlight. The new intakes merge with the existing air feed layout via newly designed ducts that, delivery rates remaining equal, lose less pressure than the previous ones, thus boosting intake efficiency.

The headlight has been compacted with the express intent of giving the intakes themselves - especially with the bike at standstill - a more menacing air. Two specially shaped rims on the undersides of the air intakes speed up air inflow. The full-LED headlight consists of a Daytime Running Light (which creates a dual 'eyebrow' effect, highlighting the upper rim of the air intake) and two compact dipped beam / high beam LED modules. 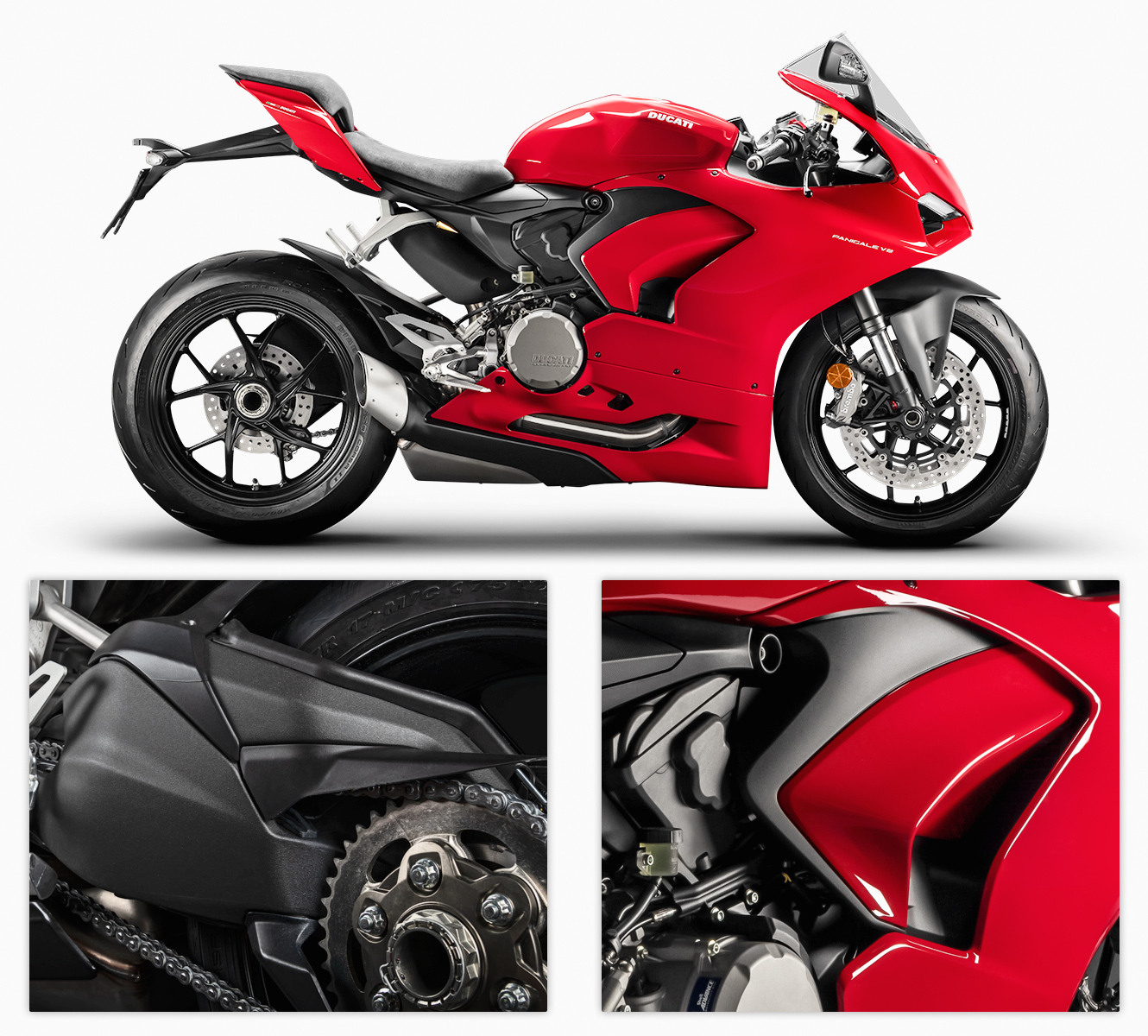 The fairing has a 'dual layer' configuration: a main layer that extends upwards and merges into the tank via two sturdy struts, and a secondary layer that also acts as an air vent. This 'dual layer' solution revives the clean lines typical of Ducati sports bikes, famed for their full-fairing look. The fairing underside merges visually with the under-engine silencer, which terminates in an extremely compact right-side-only end pipe.

Panigale V2: Welcome on Board 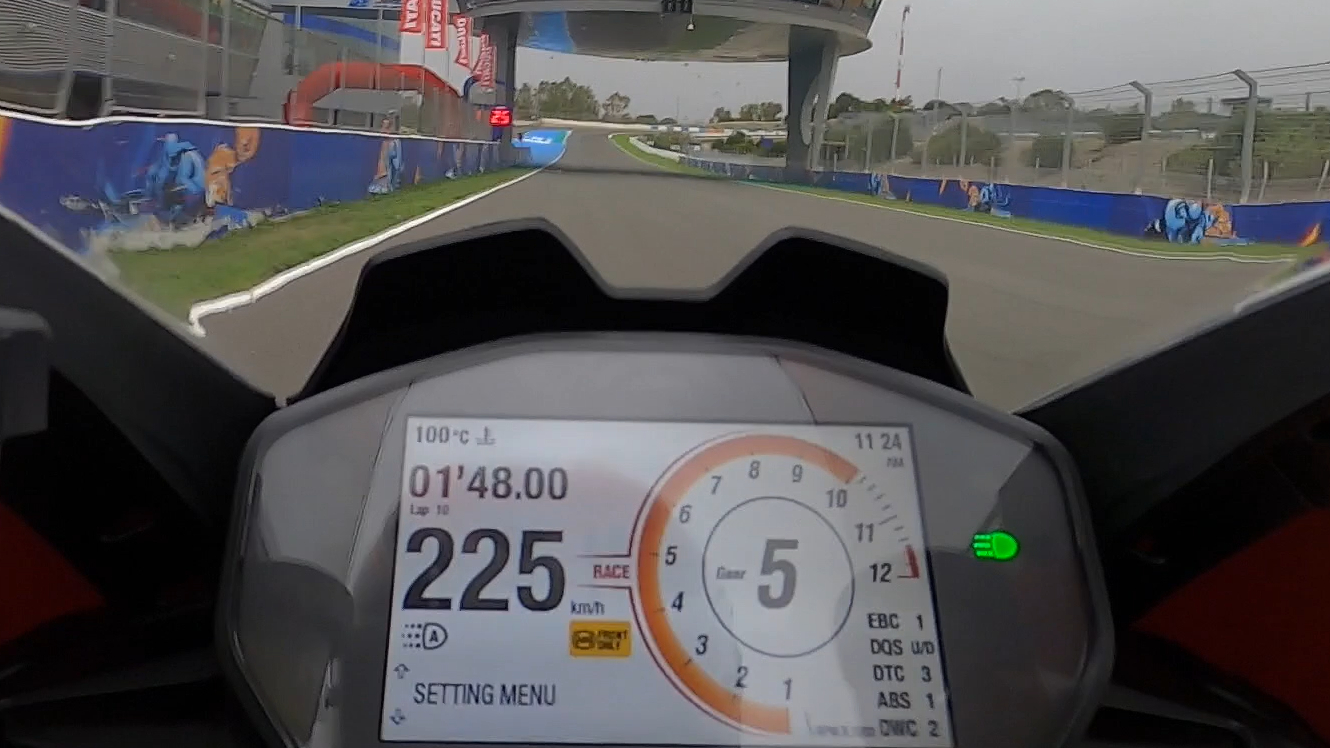 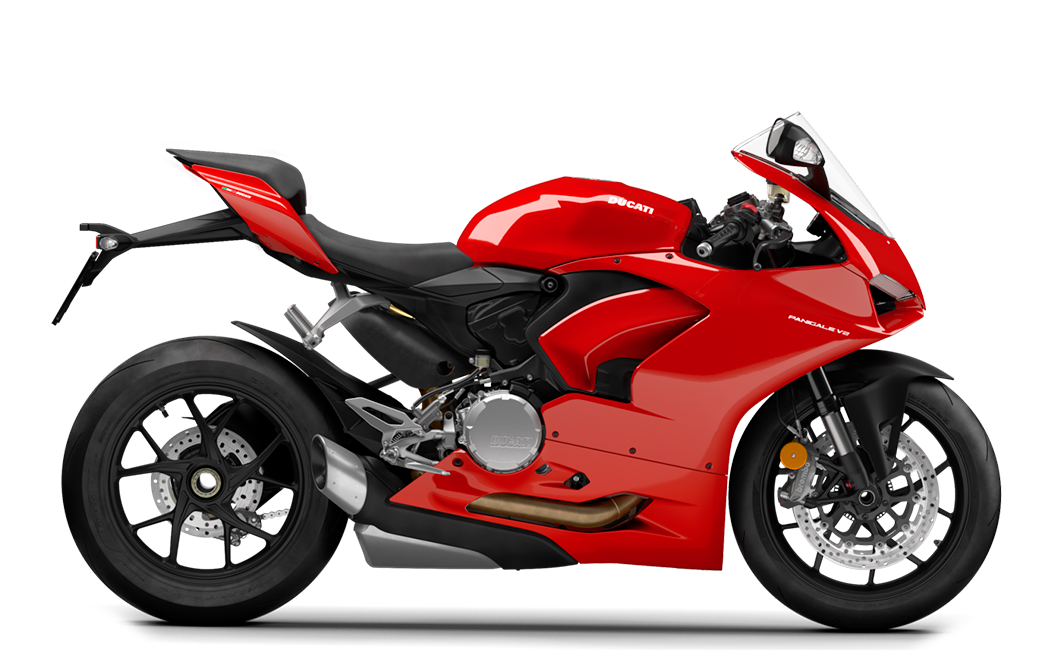 The ABS system on the Panigale V2 features the cornering function (which keeps the ABS working even with the bike leaned over) and has the same intervention logic and control as on the V4.

ABS Cornering EVO can be set at three different levels to fully satisfy the needs of all riders, on road or racetrack, even under critical low-grip conditions.Level 3 is intended for road use or in circumstances where there is little grip, ensuring safe, stable braking and keeping rear wheel lift under constant control during hard deceleration. Levels 2 and 1, instead, prioritise braking power and are better suited to sports riding on high-grip surfaces and racetracks.Level 2 is recommended for amateur track riding; the system controls both the front and rear brakes, keeps the cornering function on but disables lift-up control to allow harder, sportier braking. Selecting Level 2 also enables the \'slide by brake\' function, letting riders drift into the bends spectacularly, effectively and safely.Level 1 is not the default setting on any of the Riding Modes: it must be deliberately selected as it is intended for on-track use by expert riders. It provides racing-standard ABS intervention on the front wheel only. Both the cornering and anti lift-up functions are disabled to generate maximum performance.

The new Ducati Traction Control (DTC) EVO 2 strategy is an offshoot of the Ducati Desmosedici GP18.

In addition to interfacing with the 6-axis Inertial Measurement Unit (IMU) and adapting intervention on the basis of wheelspin and lean angle, the software significantly improves out-of-the-corner power control thanks to a new \'predictive\' strategy. Acting not just on the basis of instantaneous rear wheelspin but also its variation, it intercepts any loss of grip sooner and reduces peak wheelspin, ensuring faster, smoother intervention. All this means augmented out-of-the-corner stability (even in sub-optimal grip conditions), higher acceleration, better lap times and improved long run performance.In addition to controlling spark advance and injection, the DTC EVO 2 system uses, in all situations not requiring fast intervention, the throttle body valves to maintain optimal combustion parameters and ensure more fluid engine response and control..DTC EVO 2 can be set to 8 different levels (6 for dry conditions, 2 for wet), letting riders adapt control strategy to their individual riding styles and grip conditions to maximise performance.

The Panigale V2 is also equipped with the latest version of Ducati Wheelie Control (DWC) EVO. Using the data feed from the 6D IMU, this system keeps wheelies in check while maximising acceleration easily and safely.

The EBC (Engine Brake Control) system was developed to help riders optimise bike stability under extreme turn-in conditions; it does so by balancing the forces applied to the rear tyre under severe engine-braking conditions.

Each Riding Mode is associated with a different control parameter set-up: selecting a different Riding Mode, then, instantly alters the \'character\' of the engine and electronic controls.Riding Mode RaceRace Riding Mode - As the name suggests, Race RM allows less experienced riders to enjoy top-end bike performance on high-grip track surfaces. Selecting Race gives the rider 155 hp, with direct Ride by Wire throttle response. Race mode sets the electronics at a low intervention level but without compromising safety, with ABS set to level 2, lift-up control off and the \'slide by brake\' function (which lets riders drift the bike into the corners safely) on.Riding Mode SportSport Riding Mode - Selecting Sport gives the rider 155 hp, with direct sport-style Ride by Wire throttle response. Electronic controls are set to give riders perfect dry road ride responsiveness. Rear wheel lift detection during braking is on and the ABS Cornering EVO function is set to maximise cornering performance.Riding Mode StreetStreet Riding Mode - Street mode is recommended when riding on surfaces with poor grip. As with the Sport RM, this mode provides riders with 155 hp and progressive Ride by Wire throttle response. Electronic control settings ensure grip and stability to maximise safety.Riders can, of course, personalise settings to suit their riding style and subsequently restore Ducati-set parameters. They can also enable ABS Level 1 (intended for on-track use by highly expert riders) which acts on the front wheel only and disables the cornering and lift-up functions to allow full-on braking performance.

The DLT GPS feature automatically records and saves lap times and displays them directly on the dashboard each time the bike crosses the finish line, the coordinates of which are set by pressing the flasher button.

If a lap time is the best of the current track session, the Best Lap function causes it to flash for 5 seconds.At every lap - for a total of 30 consecutive laps - the DLT GPS records lap time, maximum speed and lean/yaw angles. The information can be displayed on the screen via the relative menu. DLT GPS is available as a Ducati Performance plug and play accessory.

The Panigale V2 can be used with the Ducati Multimedia System (DMS). This lets riders take incoming calls, select and listen to music or receive text messages via Bluetooth.

When the rider mounts the motorcycle the smartphone automatically connects to the bike via Bluetooth, letting the rider control the main multimedia functions. The TFT display shows the music being played, the new text message icon or caller\'s name. Phone call audio and music are transmitted to the helmet earpieces. DMS is available as a Ducati Performance plug and play accessory.